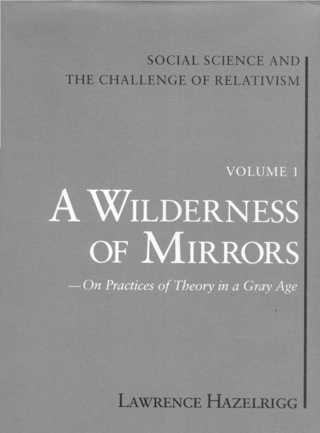 A Wilderness of Mirrors

[from pp. 450-52] In an ancient legend remembered from Jainism, each of seven blind men, upon encountering an elephant, touched a different part of the elephant’s anatomy, and each named a different object as that which he felt; none named an elephant. One of the “morals” of this familiar story has to do with a notion of perspectivism--in Jaina doctrine, called naya--namely, that perception is always partial, always undertaken from a particular standpoint toward multifaceted reality, and therefore that our claims to knowledge must be regarded as always partial, always tentative. Of course, if the seven blind men should collect their diverse contributions of perceptual information and order them just so, they might come to the cooperative conclusion of “an elephant”--thereby illustrating another lesson, the superiority of communal effort. But the feature of this legend that is here of greater interest consists in its relation of the said and the not-said. I mean the relation that gives the legend its particular force and expected effect.

But now let’s modify the story just a bit: let’s place the storyteller inside the story; let’s assume the storyteller is one of the seven blind men. What happens? The entire structure of the story changes. The storyteller, now denied the privilege of position, now without that private law of rulership and moral lesson, can no longer say what blind men cannot say unequivocally. And if the storyteller tries to speak from a position both inside and outside the story, either simultaneously or sequentially, he accomplishes nothing so much as inducement of an eventually fatal shimmer in the authority of representation.

Judith Shklar has said of the professional or academic historian, “If he comes to doubt the possibility of recreating the past accurately, he also loses his social purpose. Skepticism thus undoes the historian doubly.” The same can be said of the social theorist generally, for the question of evidence is not confined to the historian's re-creation or representation of that which is called “the past.” And when the fundamental conditions of the theorist’s claim to knowledge come into doubt, what will be said of the utility or purpose of the “social role” of “theorist”? It is no longer convincing of the theorist to argue that skepticism is merely an instrument of the method of science, an instrument directed only toward propositions of the representation of an external world. Such an argument can no longer bestow the insulations that once shielded the crucial silence in authoritative representational speaking/writing. Such an argument will not now convince--not in the face of an ironization that has dissolved the containment of “inside” by “outside”; not when it has been decided that determinative conditions, activities, and consequences of scientific knowing are ineluctably integral to that which had been regarded as “the external world”--from some Archimedean pivot the exact location of which no one ever succeeded in defining. And it is not adequate to say of this condition of the theorist or the historian (as Shklar said of the latter) that “philosophy is an unsettling presence for history,” or that “philosophical difficulties--such as, what is evidence at all?--do not go away simply because working historians do not encounter them day in, day out.” Historians, theorists, all of us, do encounter them, day in and day out, albeit often in the occultation of their conventional apparel. And the issues that are difficulties do not materialize as importations from a domain (“philosophy”) that now and again confronts the historian or theorist as an unsettling presence, a policing agency that irregularly checks credentials and the warrant of claims; rather, these issues are integral to the domain-defining activities and claims--socially, historically constituted activities and claims--of the historian and theorist themselves.

[from p. 464] So, if the classical “knowing subject” has been sucked into the vanishing hole of relativistic regress, that does not mean that we can no longer have characters for our plays, short stories, and novels... or celebrated discoverers and didacts for our treatises of science. It does mean, on the other hand, that without a speaking subject “I simply write or talk around a void” [Edward Said]. And in this immensely dangerous world we have made for ourselves, Paul Valéry’s question “Can the human mind master what the human mind has made?” becomes ever more insistent.