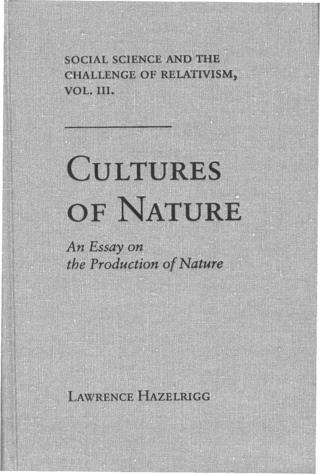 Cultures of Nature: An Essay on the Production of Nature

[from p. 43] I mean to argue that nature (and “nature”) is not a found world but a made world--and when a found world, a found world made to be found--thoroughly, concretely an effect of labor and therefore not at all lacking in reality, substance, or support.

[from p. 78-81] As culture’s other, nature appears as frontier: moving, shifting, inviting entrance and transversal, both hazardous and promising; it marks the outside of culture and to that extent is still part of culture. But nature also appears differently in otherness to culture. It makes itself manifest through an invisible hole in culture, a hole which is itself not of culture, nowhere in culture, for it is not artificial, but which nonetheless opens up in the midst of culture for a showing of nature, nature in its pure rawness and self-identity.

Clifford Geertz provides an illustration. In his essay on “thick description” and the project of an interpretive theory, Geertz borrows a small story from Gilbert Ryle, about two boys and the significance of “a wink.” Consider ...“two boys rapidly contracting the eyelids of their right eyes. In one, this is an involuntary twitch; in the other, a conspiratorial signal to a friend. The two movements are, as movements, identical; from an I-am-a-camera, ‘phenomenalistic’ observation of them... one could not tell which was twitch and which was wink... Yet the difference... between a twitch and a wink is vast... The winker is communicating, ...indeed communicating in a quite precise and special way... Contracting your eyelids on purpose when there exists a public code in which so doing counts as a conspiratorial signal is winking. That’s all there is to it: a speck of behavior, a fleck of culture, and?voilà!--a gesture.”

Geertz’ basic point is well taken. And I concur... that the “interminable, because unterminable, debate... whether culture is ‘subjective’ or ‘objective’... is wholly misconceived.” But then Geertz adds: “Once human behavior is seen as (most of the time; there are true twitches) symbolic action--action which... signifies--the question as to whether culture is patterned conduct or a frame of mind, or even the two somehow mixed together, loses sense.” ...The prima facie point of this sentence is, again, well taken. But the parenthetically introduced exception is curious, and more troublesome than curious: what human beings do is symbolic action, signification, that is, the production of meaning, “most of the time; there are true twitches.” ...In short, the “true twitch” is an instance of a strictly purely natural event which shows itself through a hole in culture and in so doing provides a pure raw material for the work of signification. The hole is itself not cultural, nor, apparently, is the ability to know what one sees passing through it... The “true twitch” is free of culture; it is elemental, a tiny piece of the elementary material from the depths above which a culture, some particular culture, is built.

[from pp. 85-86] Human nature is one of our perpetual topics, one of our elementary practices... [The] Augustinean figure of a sort of being bent to the shape of a question mark remains situated in some fashion between the natural and the artificial, between the ground of history and the historical, and therefore implicated in every (other) topic of scholarship, whether scientific “or” poetic.

Indeed, whatever the nature of human nature more particularly, it is the indispensable hinge by which culture not only is distinguished from nature but can also fold back on nature at their mutual frontier, in an operation variously described as mirroring, domestication, and/or mastery. Whatever more particularly the nature of human nature is, as this indispensable hinge it occupies two positions at once, each with its own time, its own distinctive dynamism. On the one hand, it is evident that the determination of nature, and of the nature-culture distinction, occurs in the midst of the conjunction between nature and culture, which is to say in the midst of the place laid out for a human nature. But, on the other, a different order of time compels acknowledgment of the necessary groundedness of history in a priority of nature, and so an elementary anthropology must take its cues from an apprehension of nature...

The long effort to fathom the nature of human being through a philosophy of nature deemed obviously presuppositional to any philosophy of history has typically looked for a condition named “the natural state,” a condition behind all the diverse “interfering forces” which deflect an object from the inertial course and immanent causality of its “natural state” of being. From Aristotle to Newtonian mechanics, and indeed to the initial constructions of a Darwinian biology and the static geodesics of early relativity physics, the presumption of a “natural state” reigned in those areas for which anything like a philosophy of history was simply inutile. For the question of human being, on the other hand, “interfering forces” implicated human being itself at every turn. The nature of human being appeared indissolubly as a metonymic relation of “natural state” and “interference.” This was the territory of reconnaissance for a being called “the self-reliant man.”

[from pp. 176-77] ...if the late nineteenth- and early twentieth-century European [including Euro-American] construction of “the primitive” served as a natural laboratory for examining universal attributes of human nature without the “interference” of so many complicating layers of cultural artifacts... that laboratory also served to refocus attention on some unsettled questions. To begin with, the ethnography of primitive peoples was typically written in what might be called an “infinite present” tense, ...the tense of a timeless presence. The device seemed only natural, for the peoples being written were people who had no history... They had not lived distinct “ages” or “epochs”... The most that could be said of the primitive peoples chronologically was sayable only in the European register of nature’s ages and, subservient to that, archaeology’s natural ages of the evolution of toolmaking. And yet, in writing primitive peoples in this infinite present tense, the ethnographer was describing a people’s culture.

[from p. 216] ...a culture, any particular culture, is or strives to be in charge of its frontier and the wilderness beyond (i.e., wilderness as the untamed, both untamed nature and alien culture). A culture makes its own frontier and wilderness beyond, but since those products are made to be “the untamed,” “the raw,” “the alien other,” they are always to some degree problematically controllable from within the culture’s self-consciousness of conditions of production.

[from p. 277] Recall that a major point of contention in the old debates about similitudines hominis and the Amerindian had to do with a hermeneutic enterprise... specifically with regard to the proper status of “behavioral signs.” The question was whether certain behaviors could be relied upon as indicators of the true nature (or true inner nature) of a puzzling creature. With modern biology, ...the reading/writing sequence was reversed. By 1900, the true nature of creature differences was taken to be largely established, ...and its manifestation in sexual dimorphism served as a basis for understanding behavioral differences.